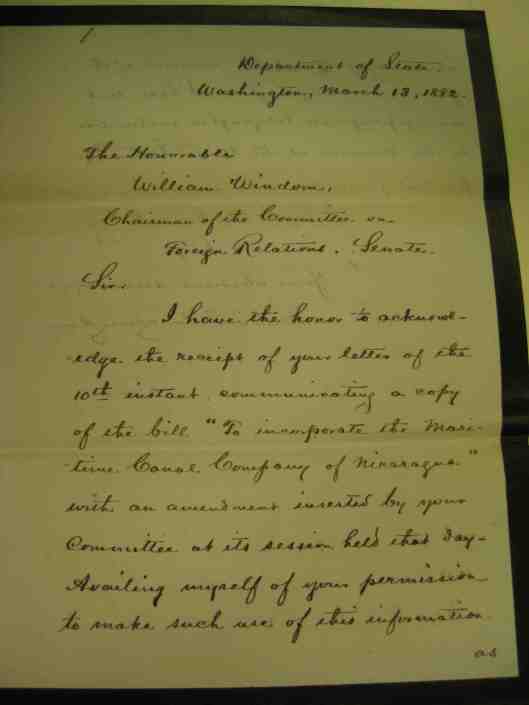 In 1797, President John Adams sent John Marshall, Charles Cotesworth Pinckney, and Elbridge Gerry to Paris to negotiate with the French Directory following repeated French depredations on American shipping. The American commissioners expected to meet directly with Talleyrand, but they were stymied by three obnoxious intermediaries who demanded a bundle of preconditions: disavowal of Adams’ May 16 speech to Congress, assumption of French debts owed to American suppliers, forgiveness of French spoliations on American commercial vessels, a “considerable” low-interest loan to France, and “something for the pocket” of the Foreign Minister (a bribe, or douceur) to sweeten the prospect of negotiating with a nation that had concluded a commercial treaty with France’s enemy just three years before.

In the booklet of duplicated dispatches Congress received, the surnames Hottinguer, Bellamy, and Hauteval were redacted and replaced with the more memorable monikers of X, Y, and Z. I had the pleasure of viewing the XYZ Papers on the last day of my internship. I was in a huge hurry, but I tried to photograph anything that looked alphabetical, presidential, or Marshallian. 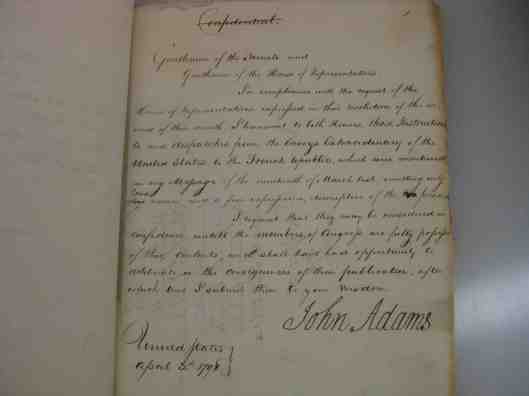 He wanted the dispatches to be “considered in confidence, until the members of Congress . . . shall have had the opportunity to deliberate on the consequences of their publication,” but they were published almost immediately.

And now for portions of the envoys’ letters: 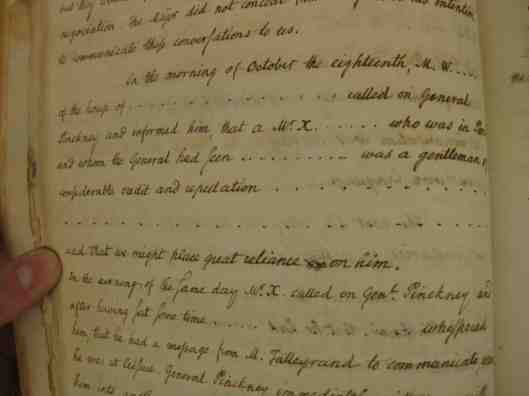 “M. X . . . replied, that the Directory, and particularly two of the members of it, were exceedingly irritated at some passages of the President’s speech, and desired that they should be softened, and that this step would be necessary previous to our reception: that besides this, a sum of money was required for the pocket of the Directory and ministers, which would be at the disposal of M. Talleyrand: and that a loan would also be insisted on.”

“M. X . . . could not point out the particular passages of the speech that had given offense, nor the quantum of the loan, but mentioned that the douceur for the pocket was twelve hundred thousand livres, about fifty thousand pounds sterling.” 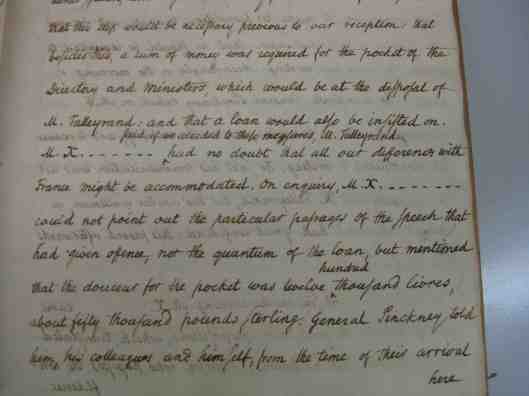 “It is desired that in the official communications there should be given a softening turn to a part of the President’s speech to Congress, which has caused much irritation. It is feared that in not satisfying certain individuals in this respect, they may give way to all their resentment. . . . The payment which, agreeably to the decisions of the commissioners, shall fall to the share of the French government, are [sic] to be advanced by the American government itself.”

“The amount of the loan he could not ascertain precisely, but understood it would be according to our ability to pay. The sum, which would be considered as proper, according to diplomatic usage, was about twelve hundred thousand livres. He could not state to us what parts of the President’s speech were excepted to, but said he would enquire and inform us.”

” . . . we would retire into another room, and return in a few minutes with our answer. We committed immediately to writing the answer we proposed, in the following words: ‘Our powers respecting a treaty are ample: but the proposition of a loan in the form of Dutch inscriptions, or in any other form, is not within the limits of our instructions: upon this point therefore the government must be consulted: one of the American ministers will, for the purpose, forthwith embark for America: provided the Directoire will suspend all further captures on American vessels, and will suspend proceedings on those already captured’ . . .”

“Nothing new has occurred since our last, in date of the twenty fourth ultimo. We can only repeat that there exists no hope of our being officially received by this Government, or that the objects of our mission will be in any way accomplished . . .”

A litany of French grievances:

A select few pages can’t tell the entire story, but I’d say this is a pretty decent sample.

And in case you’d like a couple more pictures, I actually own a letter written by X (Jean Conrad Hottinguer) himself: